The Best Moonshine In The South Carolina

Home > Food + Drink  > The Best Moonshine In The South Carolina 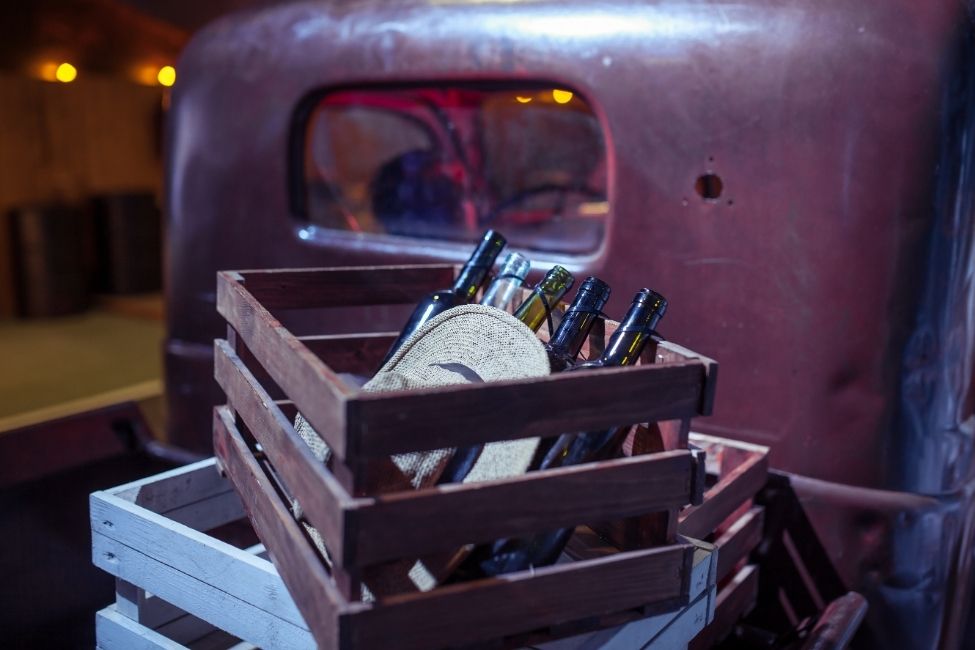 18 Dec The Best Moonshine In The South Carolina

Posted at 17:35h in Food + Drink by Rory Witkowski

Our quest to find the best moonshine in South Carolina led us on a educational journey of monumental proportions!

We thought we knew the basics of moonshiners and bootlegging, but oh were we wrong. To really appreciate our list of the best South Carolina moonshine distilleries, take a quick look at The History of Moonshine here.

Just like many of our food and beverage guides, we had certain criteria to make it on our curated list. Below are a few observations that will be helpful when drinking (and rating) the moonshine on the list:

We believe “burn and bite” should play no part in a nip of moonshine. The preponderance of a fiery bite in bad moonshine likely explains its poor reputation with many people. If you drink a sub-par shine you will get a burn with a bitter aftertaste and might not want to try moonshine again.

Because aged whiskey draws between 40% and 70% of its flavor from wood barrels and aging time, it stands to reason that moonshine (being unaged) must exhibit clarity and smoothness to be considered excellent. Every moonshine on our list emphasizes these two qualities as well as a good nose.

A well-crafted moonshine will be as silvery and glistening as the moonlight for which it’s named. If your moonshine flares, bites, or burns you, it is not any good. 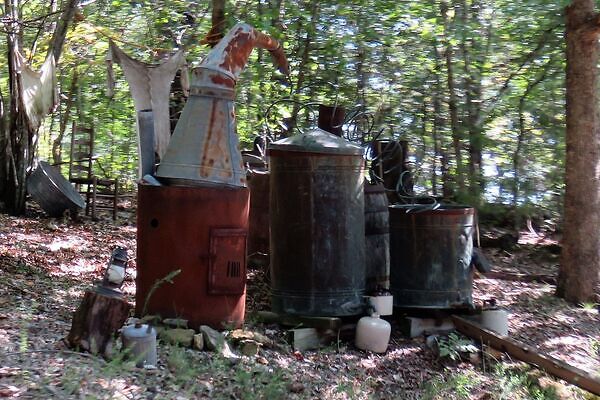 Every distillery had a well-crafted product, but the ones that made our list were exceptional.

The distilleries on our list, in most cases, have a variety of moonshine but for this article we chose our favorite. As every distillery’s moonshine had its own nuances, this list is not a ranking nor is it in any particular order. The sole, binding principle is that these are the best that I tasted. 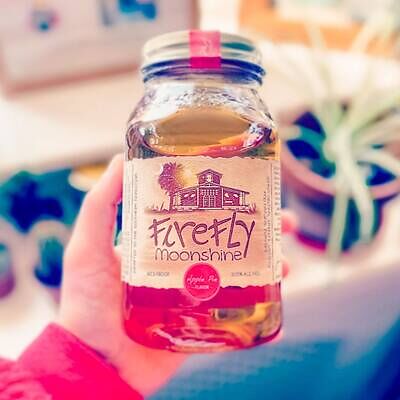 This product is made with care and concern. It looks like water in the glass. It’s bottled at 100.7 proof and 50.35% ABV….obvious with one sniff. It has a wonderful aroma of corn, stone, spring water, and hay. It gives you a South Carolina countryside feeling. Nice sweetness of the corn and has a satisfactory kick. The bounty is in the finish – nice balance and very smooth. 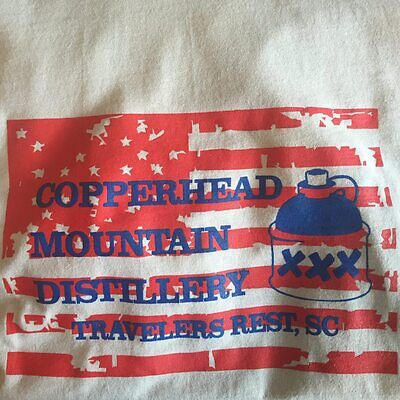 We loved the classic White Lightning. Rich bold taste. This corn whiskey is bottled at an electric 100 proof 50% ABV so it deserves its moniker. To my taste, it was smooth and easy drinking especially for a 100 proof. The mouth feel is a little dry due to the proof and gets drier as it leaves your tongue. The finish is a sweet, long-lasting taste that lingers for a while. This is a fine moonshine product. I made a nice cocktail by adding ice, lemon, and bitters. 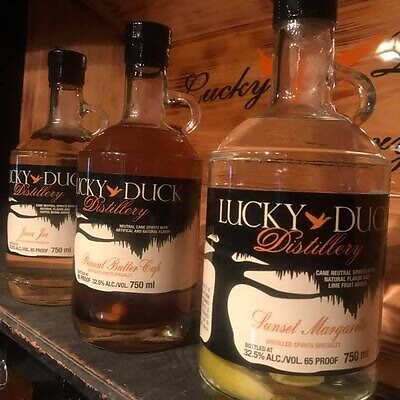 This is a 90 proof, 45% ABV, corn-based moonshine. Of course the liquid is clear in the glass, but leaves a viscous coat. Drops a few legs and leaves a beady crown. To me, the nose had a picnic quality to it with a light scent of crisp corn and seemingly some fruity undertones. The flavor was peppery with a corn layer of sweetness. The finish was clear, short, and smooth. A straightforward, easy-drinking, white lightning. 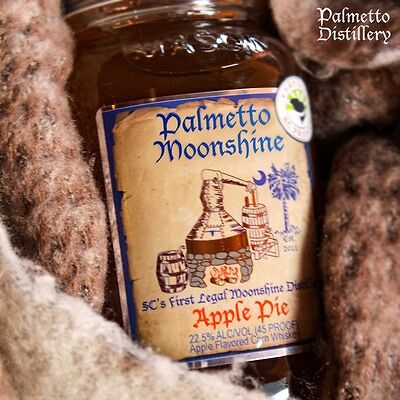 A blend of white lightning moonshine with juice made from South Carolina peaches. This is far from a high-octane moonshine. In making it a flavored spirit, the base has been cut down to a 22.5% ABV, 45 proof. The reduced ABV was apparent upon my first sip. I found it as easy drinking as a glass of wine. No water, ice, or tiny sips. Yet the low ABV did not thin the liquid down. This is good stuff – simple, tasty, and goes down clean.

Palmetto Distillery made the first legal moonshine in South Carolina after the 2009 legislation.

Its moonshine line up consists of White Lightning, Peach, Apple Pie, and Blackberry. 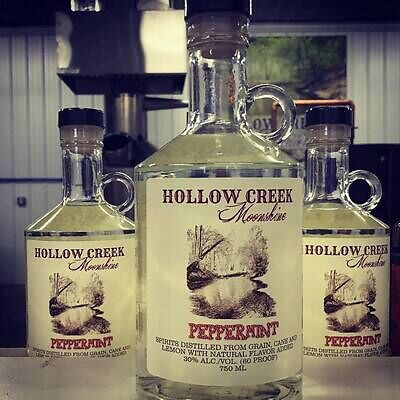 This moonshine is distilled from grain, sugar, lemon juice, and other natural flavors. Very drinkable at 60 proof and 30% ABV. This gold-colored shine has a nose of toasted marshmallows and warm caramel. The finish is creamy, but not too sweet, soft, and very smooth. This is a luxurious taste on its own and a great addition to a cocktail. 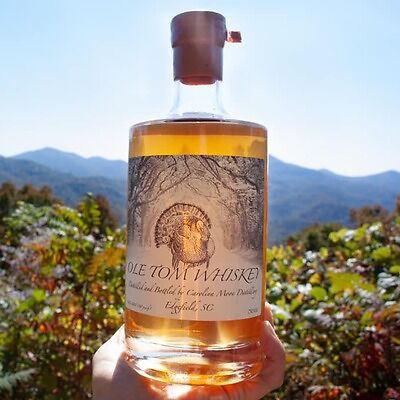 A fruit-infused moonshine bottled at 80 proof 40% ABV which gives it an edge in a flavored, white whiskey trend that’s taken to reducing the proof to an aged whiskey standard. Husky corn comes through the luscious, but not too sweet, blackberry infusion. The finish is smooth and is proof that a fruit-flavored moonshine can be palatable with a sturdy ABV.

Carolina Moon produces three fruit flavored moonshines: blackberry, cherry, and peach. It has a white lightning called Rabbit Spit (mean enough to make a rabbit spit in a bulldog’s face) at 116 proof which is a nod to its small storefront at 116 Court House Square. 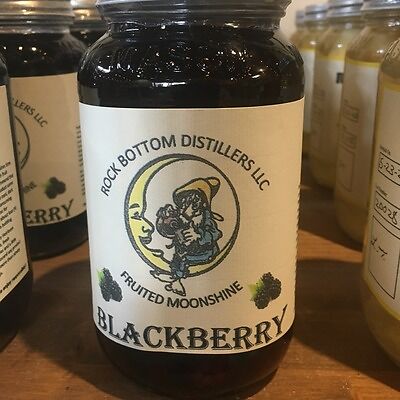 This is old-time “sugar shine” distilled from 55% sugar cane 5% sorghum and 40% grain. At 90 proof and 45% ABV it hits the right numbers. It contains some corn and other grains for flavor, but the alcohol comes from cane sugar. This is retro in the best possible way. It is a superior product and very drinkable. You will not go wrong with this moonshine. 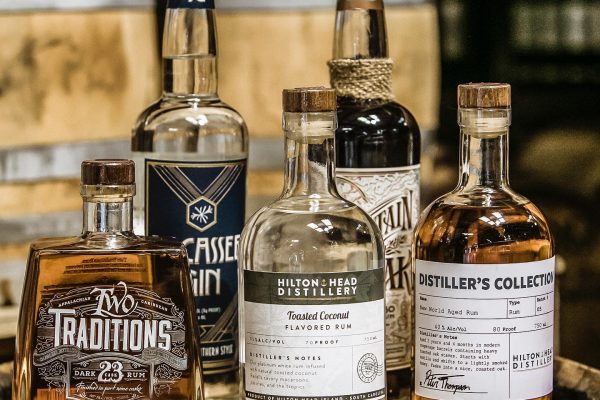 I would have had another distillery on this “best of moonshine” list but, unfortunately, in October of this year, the Dark Corner Distillery in Greenville closed its doors after nine years. Dark Corner’s corn-based whiskey recipe was based on the kind of moonshine that had been produced since the first whiskey tax. It was made from heirloom local corn, an all-grain mash bill, and distilled two times in a copper pot.

It is 100 proof liquor with a significant tasting palate. It’s enjoyable straight up or with a bit of ice. But, you are in luck! You can still get this exceptional moonshine in local liquor stores and by calling or visiting Hilton Head Distillery.

This smooth and aromatic whiskey is splashed with sweet tea to make it user friendly. It was created by the well-known, iconic moonshiner Marvin “Popcorn” Sutton who committed suicide rather than go to jail for producing illegal moonshine.

Made by NASCAR legend and former bootlegger, this shine goes through a triple distillation and is as smooth as can be.

A quadruple-distilled, Virginia-based spirit which makes it cocktail friendly. The charcoal filtering removes any bitterness and adds some sweetness.

Ole Smoky is made in what was the first federally licensed distillery in East Tennessee (Gattenberg). It is a 100 proof product made by the long-term distiller of Maker’s Mark Bourbon. 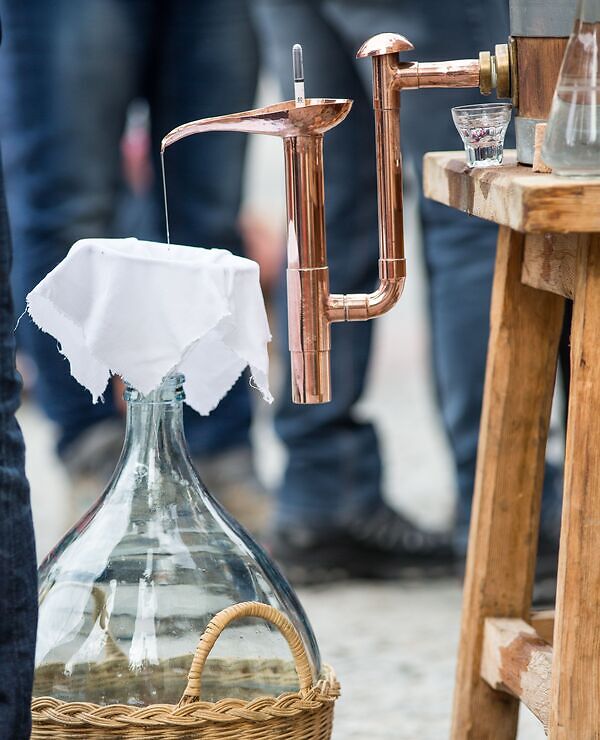 As we have seen, moonshine has done its “time” and now has joined “society.” It’s a versatile beverage due to its clean flavor. White Lightning versions, especially, are easy additions to any punch and a great base for any libation. I also think it ups your Bloody Mary and Margarita games.

After reading this article, you might be thinking, is there still illegal moonshine? I don’t believe that will ever come to an end as it’s too ingrained in the culture. But, remember, the Moonshiners (the show about the backwoods guys hiding from the law) isn’t real. The guys aren’t in jail because they are legal….you can buy the moonshine they make on the show. In fact, my uncle with his wine casks in the basement is probably breaking more laws than the guys in Moonshiners.

There is a price, though, for becoming mainstream. It attracts the big, large, corporate enterprises looking for a new cash cow. As we have seen in the craft beer market, small breweries are being bought out by the giants of the industry. Moonshine was never meant to be mass produced. It is both a science and an art in which small batches produce the best liquor. Every distillery on our list takes an artisanal approach and they stay close to tradition. If you want the real taste of classic moonshine then start with this list and support these true keepers of the flame.