Posted at 19:34h in Food + Drink by Blair Witkowski

Shaken or stirred? If it’s the former, you’ll need a cocktail shaker. The most characteristic bartending tool, available in many shapes and sizes, it’s essential behind any bar. Basically there are three different styles of cocktail shakers: the Boston shaker, the Cobbler shaker, and the French shaker. All three have been around for a very long time. Let’s briefly look into the world of cocktail shakers to give you some background information.

History of the Cocktail Shaker

The first evidence of a cocktail shaker was found in South America as early as 2000 BC. Fragments of bottles with traces of alcohol in them have been identified as being for the purpose of mixing drinks.

According to accounts, the Spanish Conquistador Hernando Cortez used golden cylinder-shaped containers in the 1500s to prepare frothy cacao mixtures.

The cocktail shaker we think of today became part of the general cocktail making paraphernalia around the mid-19th century. Before these shakers were around, drinks were simply tossed back and forth between two glasses to mix the ingredients. Stainless steel cocktail shakers were standard bar equipment by the mid-1850s.

By the time saloon keeper and bartender Jerry Thomas wrote the first ever cocktail book, How to Mix Drinks, in 1862, he was already instructing his readers to shake their drinks stating: “every well ordered bar has a tin eggnog shaker, which is a great aid in mixing.”

Many new cocktail shakers, new versions and improvements were invented by bartenders but the main three, the Boston, the French, and the Cobbler, have stood the test of time. As the concept of the shaker developed in the United States, what was later known as the Boston shaker dominated American bars. The version that was most popular in Britain and western Europe was called the French shaker. The third type is the three-part, or Cobbler shaker, which involves an integrated strainer. 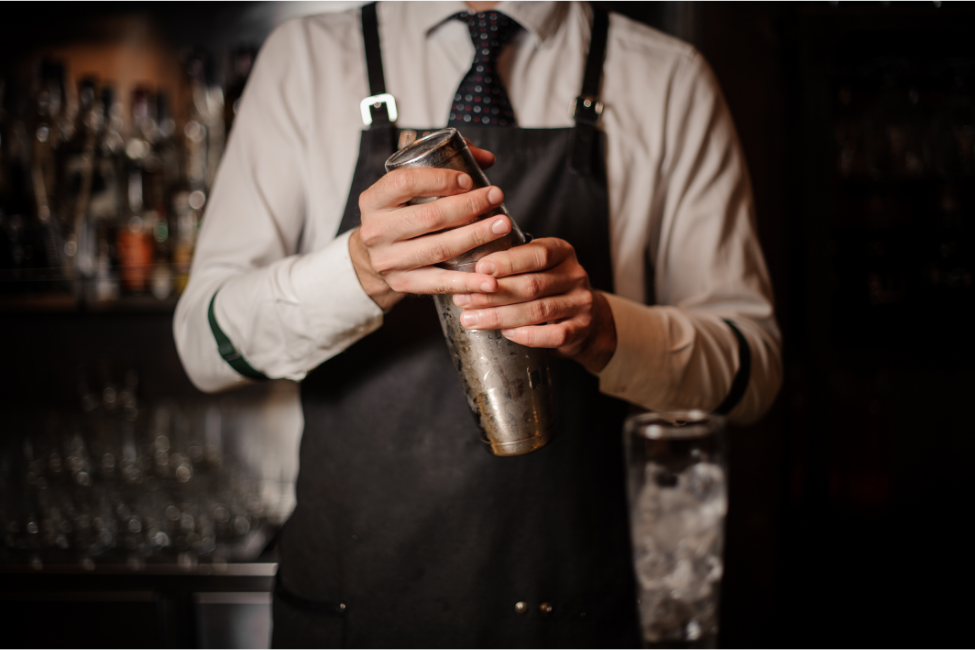 Pros and Cons for each Cocktail Shaker Type

The French shaker is a lightweight, 2-part stainless steel shaker which chills your liquids first and efficiently, is durable, and sounds great when you shake with ice. The downside can be that they are quite difficult to open due to a very snug fit of the two parts.

The Boston shaker also consists of two parts: one stainless steel tin and one glass cup. On the plus side, this type of shaker enables you to shake several drinks at once. Also, the glass part of the shaker allows the guest (and bartender) to see what goes in the cocktail. The downside is that the glass can break if you’re not careful. Also some level of experience is needed to open the shaker.

The Cobbler shaker consists of three parts: two stainless steel tins and a built in strainer. This design makes it user friendly for beginning bartenders. The downside is that they are relatively small, making it harder to mix multiple drinks at the same time. Also they have a tight seal which can make them difficult to open.

A cocktail shaker can make you look professional and sophisticated while making sure you have expertly blended drinks that taste extraordinary. This is because when you shake your shaker you are merging the ingredients while also aerating them.

If you’re the type of person that likes your drinks to be shaken, not stirred (like a super spy or someone who throws extravagant parties like Gatsby) then you certainly need a cocktail shaker.

But with so many shakers on the market, which to choose? No need to worry, read on and we’ll find the best shaker for you… 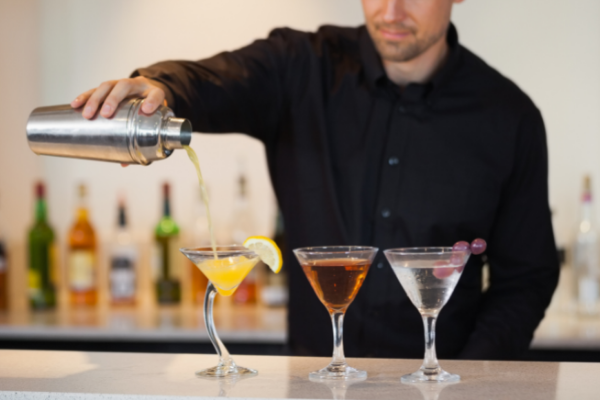 These weighted tins are an industry standard for a reason. They are durable and the relatively thin walls of the tin ensure that they form a good, tight seal from day one. We don’t recommend banging the ends of the tins together to seal them when double shaking as this will cause the weighted caps to come off prematurely.

Each tin (large and small) holds two drinks and is made from weighted stainless steel. Choose a classic silver, or opt for a more sleek rose gold, gold, or black. These are light shakers and easier than many shakers to grip.

Each set includes an 18- and 28-ounce shaker set, as well as a Japanese style jigger designed with an elongated shape to give smooth, easy pours. Each jigger has a dual-side ounce and two-ounce pourers. Also included is a 13-inch, teardrop-end bar spoon and a duty Hawthorn strainer….everything you need to whip out a cocktail or four.

These hand wash-only shakers are plated in 18/8 stainless steel so as not to have pitting and corrosion. They are very durable and also are less expensive than many other complete shaker sets on the market. Also available in copper, antique copper, gold, and stainless steel.

This is a shaker that offers protection against cold fingers when shaking your drinks. This is helpful because many times when preparing drinks, you notice your fingers going numb because of how cold they are.

Offers a jiggle cap that has the measurements on the inner surface, which is very helpful for preparing drinks precisely. This shaker is multifunctional, and you can use it to make other drinks as well. This shaker makes great iced tea or coffee.

This shaker is impressive. It offers so many great accents and benefits including a thicker gauge steel. The shaker has a more weighted design and is built to be sturdy, thus enhancing its durability.

The shaker comes with a glass as well, and the glass is rim tempered. That makes the heat concentrate on the rim area and then immediately gets followed by a cooling process. This also secures the longevity of the shaker.

The seal takes a little getting used to on this shaker, and make sure you don’t jam the shaker and the glass together too hard. This can cause the seal to get stuck and it’s difficult to get undone. Warm water will help loosen it if you find yourself in that situation.

Very well made. Throughout our testing it never leaked. A very quiet, muted shake and you will not feel the cold. Easy to open. Comes in several fun colors. The “to-go” lid easily transports drinks, if so inclined.

This set is made with solid construction giving it great weight with an easy separation. These tins have more weight than traditional sets as they are made from heavier, higher-grade steel. Great grip.

This is more of a tip than a ‘not like.’ Using this set you will not feel the cold because of the thickness, so be careful that you don’t over dilute your drinks. It’s better to go by shakes rather than feel.

A quality shaker. This shaker is made of glass and has a stainless steel cap. It has a measuring glass shaker that is easy to use, and because it’s made of glass it can show you how much of each cocktail you have, and how it’s being prepared, so there’s less chance of error.

As an added attraction, this shaker includes recipes on the shaker itself. It has five recipes that are great for any occasion.

Best to wash by hand. If you use the dishwasher the line markings will fade, and take away one of the best features

This set includes a leak-proof cobbler shaker with built-in strainer, a jigger, two speed spouts, and some instructions on how to make cocktails. This set is very easy to use. The product is made from the best rust-proof stainless steel and can last for a long time. You can be a professional bartender at home with this set.

This is a great choice if you want to own an insulated cocktail shaker. With a double-walled design, this is a perfect selection for a minibar. Vacuum insulation will keep your cocktails cold until you are ready to pour and will protect your hands from getting wet.

This shaker includes a top lid, a built-in strainer, and a removable cap. Many colors are available.

Like other Boston shakers, the Cresimo comes with a weighted tin and an unweighted tin. The set also includes a premium, double-size measurement jigger tool, a twisted bar spoon and several cocktail recipes. The set is made with 18/8 stainless steel with a sleek mirrored finish for durable use.

There is also a leak proof ability. It can be cleaned in a dishwasher or washed by hand

One of the most attractive and classic cocktail shakers that you will ever see. You can use this shaker to decorate a space but it also makes a wonderful gift for friends and family.

The Dublin shaker gives off a luxurious look with its thick crystal material. It’s transparent so you can watch the color and ingredients of your cocktail inside while making them. After using it, you can place it on a counter as a decorative piece.

This cocktail shaker includes a 17-ounce shaker, a chrome metal lid, and a strainer.

This fashionable and modern shaker can make all your cocktails but it’s also versatile enough to make iced coffee.

All parts are 18/8 grade stainless steel without any harmful chemicals. Rust and leak proof. Ideal for cocktails, mixed drinks, and iced coffees.

A good cocktail shaker is virtually required at every home bar. It is basic equipment that’s used frequently. Finding the best cocktail shaker will help your cocktail making be convenient, precise, and stylish.

Each buyer has to decide which features are most important to them and how much they are willing to pay for them. Those who use cocktails shakers more frequently or are trying to impress guests will want a high-end model. Those who make cocktails only rarely will be satisfied with a less expensive but adequate shaker. For everyone in between there are mid-ranged cocktail shakers that balance price and quality.

Now it’s time to up your cocktail game by purchasing a cocktail shaker!