The 7 Best Beaches To Find Shark Teeth In South Carolina

Posted at 18:12h in Travel + Adventure by Blair Witkowski

Finding Shark Teeth On South Carolina Beaches Is Easier Than You Think, Just Follow Our Guide!

Any beach on the ocean is liable to have some shark teeth. Sharks (all but one but that’s for another day) live in saltwater and generally hunt in both the deep and shallow waters close and far away from shore. So you’re liable to find their teeth on the shores all over the world.

All that being said, finding a shark’s tooth is not always fast or easy. I have a friend who lived near the beach in Florida for 20 years, went to the beach every weekend to hunt for shells and shark’s teeth, and he never found a single one.

So this article is for those who are new to shark teeth hunting as well as those who want to increase their hauls. 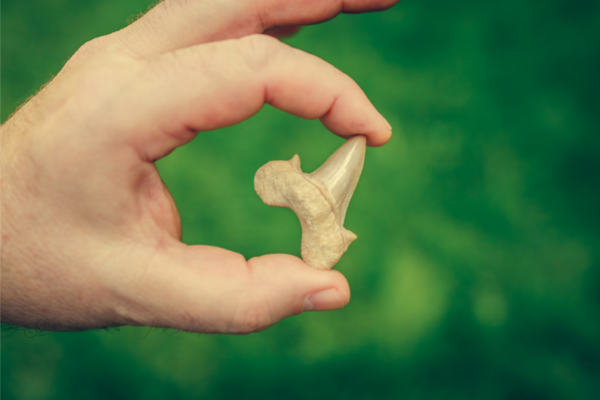 Sharks consistently produce new teeth to replace the ones they lose. During a shark’s lifetime, it is estimated that it can have anywhere from 20,000 to 40,000 teeth. They have teeth in layered rows with both their upper and lower jaws that can have two to three or as many as 15 rows of teeth. If they lose a tooth, another one spins forward from the rows of backup teeth.

Most sharks have up to five rows of teeth and can have as many as 3000 teeth at one time in their mouth. They lose up to 100 teeth per day. The teeth can be regrown in days or a month. Sharks teeth are found washed up on the shorelines all over the world.

White Teeth: White teeth indicate they have just been pulled out or fallen from a dead shark.
Black teeth: Black and other colors have been fossilized over the years. 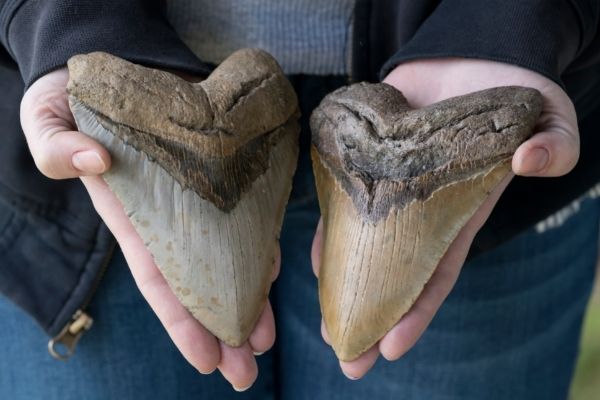 The megalodon shark was not only the biggest and baddest prehistoric shark that ever lived, it was the largest marine predator in the history of the planet. Today’s great white sharks would be a mere bite size snack for this monster. It terrorized the ocean waters around the world from 16 to 2.6 million years ago. This massive, extinct species of shark was estimated to grow nearly 60ft in length and has often been declared the greatest vertebrate predator of all time.

These mega sharks were a giant and more robust version of the great white. They had 276 teeth in 5 rows and, like today’s sharks, they shed their teeth throughout their lifetime. The largest Megalodon teeth on record reached a staggering 7.5 inches and weighed over a pound. Compare this to the great white whose teeth top out around 3 inches long.

Their teeth were bone crushing and flesh cutting tools, which evolved for grasping powerful prey such as Baleen whales. Fossil evidence supports that the Megalodon focused its attack on the hard bony parts of its prey such as rib cages, flippers, shoulders and spines, effectively disabling large whales and destroying organs such as the heart and lungs. This strategy explains the thick, robust teeth developed by the Megalodon.

Megalodon teeth are so rare, the last one sold for nearly $50K

Being from prehistoric times, many shark teeth hunters prize megalodon teeth, yet they are, in fact, relatively common fossils in many areas of the world. Their teeth were very solid and fossilized quite easily. While Megolodon teeth in general can be quite common, large or exceptionally well-preserved specimens can be very rare and can fetch big bucks from collectors. For example, 7-inch Megalodon teeth are so rare, the last one sold for nearly $50K. 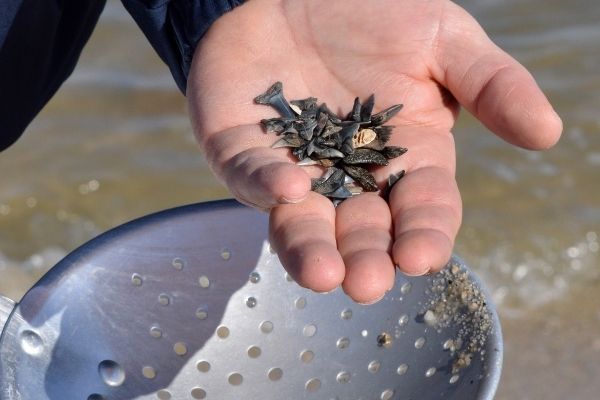 Know What to Look for

Teeth that were recently in a shark’s mouth are white. I’d recommend leaving them where they are. But the majority of the single shark teeth scattered on beaches are dark colors, mostly black with grey but you can find them in a variety of hues, including reddish-brown to rare blue ones.

These teeth have been fossilized over thousands of years, if not millions, and it is part of what makes them special. Their fossilized colors come from sediments that have been infused in them over the years. So make sure you’re looking for color versus white.

Aside from colors, make sure you’re looking for triangles. Most shark teeth have three distinct points. When you first start looking at them you must train your brain and eyes to spot these points or triangles. Have you ever seen the magic eye puzzle? You look at lines and zig zags that don’t appear to be anything, but if you relax your eyes or let them blur slightly or stare into the distance, you suddenly see a 3D object, like a lion or an airplane. Or maybe a shark. Training your mind and eyes to see shark teeth is similar.

Look at a patch of sand with shells on it near the waterline and think, shiny black triangles. Focus on any shiny black object and ask yourself is it a triangle? When you do this, the teeth often reveal themselves. If you are not sure, pick up the object and examine it. Most shark teeth, when free of sand, have a blackish-grey gloss to them, especially if they are still wet from the ocean. Train your mind and eyes to look, and you will find….if you are in the right place (more on that later). 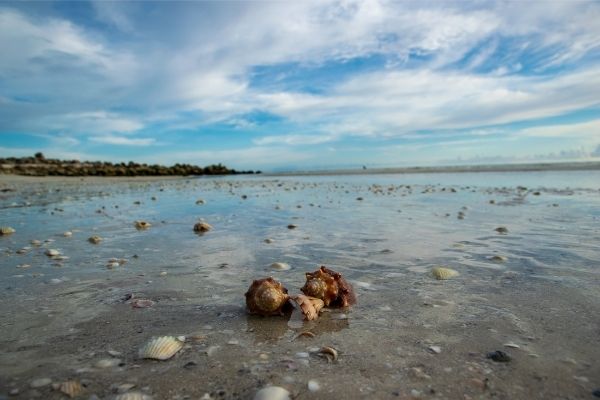 Search at the Right Times and Places on the Beach

You can find shark teeth most anytime at the beach if there is enough light to spot them. But you often find many more at certain times and in optimal situations. Here are several: 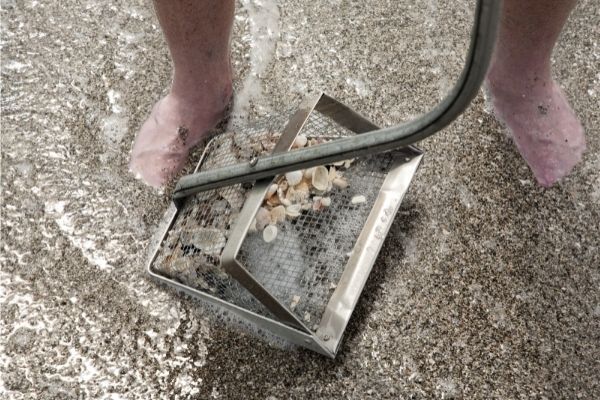 If you scan constantly, you can miss the teeth. Instead, pick a spot and stare for a few minutes looking for shiny black triangles. You are much more likely to see the teeth than if you do a continuous scan. Over time and with some practice you’ll become great at spotting the teeth in an area with a brief stare before moving on to the next spot.

If you found a promising location with lots of shells and debris that rolled up with the tide, bring a sifter. Not like a flour sifter, more like a colander or what you’d imagine a prospector using. You can actually purchase one online, just look up “sifting pan.” We like this Shark Tooth Sifter from Amazon. 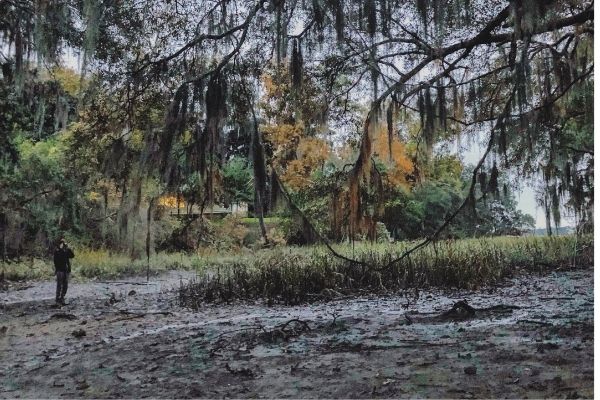 Though this article concentrates on shark teeth hunting on beaches, there are hunting possibilities in tidal creeks and rivers but there are a few things you should know before venturing out.

Now for the most important tip: Look On the Right Beach!

Shark teeth can be discovered in many surprising places including graveled roads and winding creek beds. Millions of years ago, oceans were in different places than now. But if you want to find a lot of shark teeth, go to the right beach. We compiled a list of seven South Carolina beaches that are ideal for shark teeth hunting. Just remember to follow our tips for the best chance of going home with a bounty. 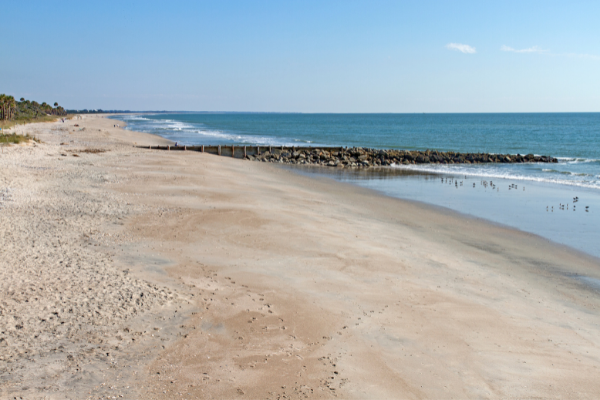 Edisto is a great beach for hunting shark teeth. Though they are not particularly large, there are often mega quantities on this beach just waiting to be found. If you want to have the best chance of finding a lot of teeth quickly then make sure you check between rock piles and close to shell beds as they tend to amass there. While the teeth are small, this is a great place to take kids as they will be excited to find so many teeth in a relatively short amount of time.

One of our favorite places to go when on the hunt for shark teeth is Folly Beach, and it rarely disappoints. Not only is the area often jammed with teeth, but they are usually larger than what can be found in other areas. We have found huge tiger shark teeth and sand shark teeth, and they are often of high quality. Sometimes the pickings are sparse but the ones you do find are usually in great condition which makes up for the low numbers. 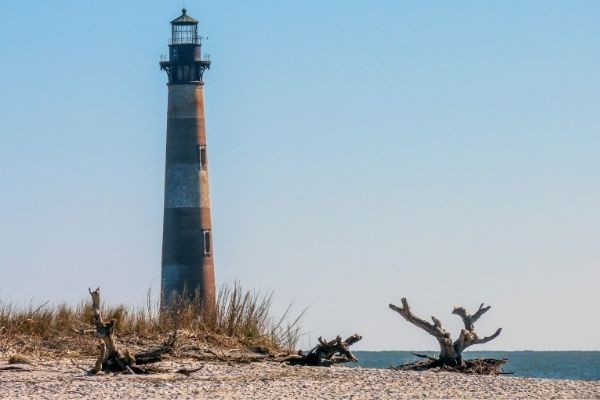 Morris Island lies in the outer reaches of Charleston Harbor and is reachable only by boat. From the island there are unmatched views of the Charleston skyline, Ravenel Bridge, and Fort Sumter. Shark teeth are plentiful in Morris Island. You can easily spot shark teeth fossils while exploring the beach and relaxing in the idyllic atmosphere.

There are well over 400 known species of sharks. Common species found on Cherry Grove Beach include the sand tiger, bull shark, lemon shark, and traditional tiger sharks. Rare megalodon teeth can also be found here – an average of one documented per year. In Cherry Grove, visit the areas between Inlet Pointe Villas and the Cherry Grove Pier to find the most copious shark tooth hunting environs. 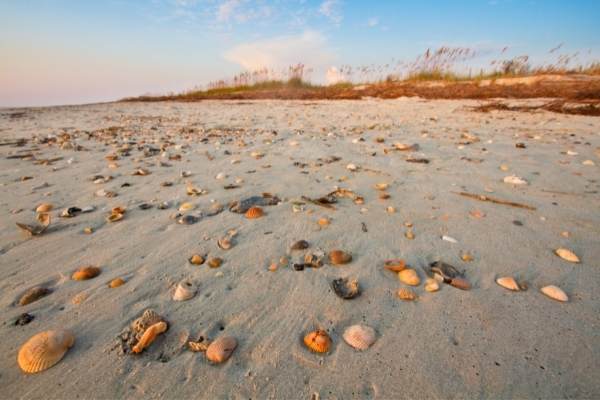 This is a great spot for finding shark teeth. If you want to look here then our suggestion is to start closer to the inlet as you will have a better chance of finding teeth and they are usually of a higher quality. This is also a great beach for kids as there is usually plenty of variety. Bypass the south side of the island, as shark teeth are scarce there and you will likely be discouraged and dissatisfied.

The family vacation destination is also prime shark teeth hunting territory. We have had our best luck in central Myrtle Beach, especially between 10th Avenue South and 30 Avenue North. Early morning is your best bet, as later in the day the beach is inundated with beach goers and teeth hunters. Right before or immediately after high tides can be rewarding as the tides pull away from the sand and reveal fossils and debris. Sifting around shell beds should reveal shark teeth.

Kiawah is a barrier island located 25 miles southwest of Charleston. It is primarily a resort and private beach town, but there is public beach access at Beachwalker County Park. We have been very happy about that as the island offers some outstanding shark teeth hunting. A large variety of sharks inhabit the waters around Kiawah and your hunt will normally turn up many different species. We have great success here after a storm when the sand has been shifted causing many fossils buried in the sand to surface.

All the beaches on our list have the added benefit of being stunningly beautiful and wonderful places to relax. We hope this article helps you find more shark teeth when you are at the beach, but one word of caution: this pursuit can be highly addictive. Going to the beach will never be the same – it will now be even more enjoyable. Happy hunting!