How To Eat Gluten Free At Restaurants

Home > Food + Drink  > How To Eat Gluten Free At Restaurants

29 Oct How To Eat Gluten Free At Restaurants

So you’re eating gluten-free because of gluten intolerance, celiac disease, or simply because you want to take advantage of the anti-inflammatory benefits of the gluten-free lifestyle. As it turns out, even though you’ve sworn off foods containing gluten your friends, co-workers, and even family members aren’t quite on the same page.

When they invite you to the newest pizzeria, bakery, or restaurant in town you don’t want to decline, but the fear of inflammation, falling off your gluten-free diet, or (even worse) a problem with your celiac disease flaring up has you wondering what to do.

How to eat gluten-free in restaurants is a learned skill. A restaurant can be a scary place for the celiac or gluten-intolerant person. When you know you’re going to have an uncomfortable “digestive episode” if you ingest a crumb of gluten, and the reaction for that crumb can cause damage in your gut that takes months to heal, you have to be very careful.

We get it. For the gluten free diner, eating out can be a daunting (and sickening) experience. So we’ve put together nine strategies to avoid gluten in restaurants that will empower you to feel comfortable and confident when you place your next (gluten-free) order.

1. Do you research first

The best way to locate restaurants where you can eat gluten-free is to look up blog posts written by people with gluten issues who have already tested them. Gluten-free blogs are a reliable source of information as they are compiled by folks who go through your same struggles and are really scrupulous with their recommendations.

Another good option is to download specific gluten-free apps (like Find Me Gluten Free) on your phone.

On the other hand, looking up “gluten-free restaurants” on Yelp, Trip Advisor, or Google Map will not necessarily give you accurate results. These apps can pick up the words “gluten-free” even from random comments left by their users. Somebody typing out, “…there was no gluten-free food in this place” is enough to make a restaurant pop up in your search and give the wrong information. 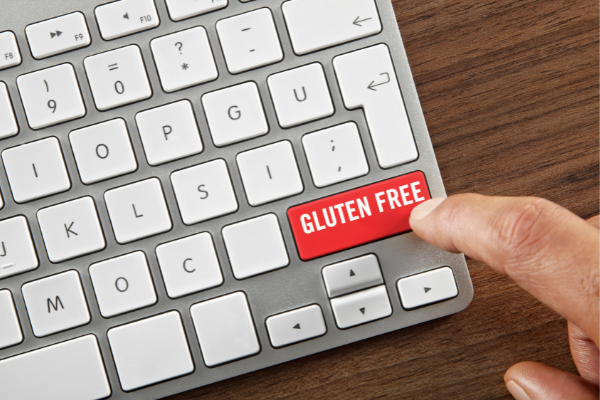 Whether you are browsing through a gluten free-app or maybe out and about a town, make sure to be selective when it’s time to choose where you are going to eat.

Before you decide to pull the trigger and walk into a restaurant, check out their website and see if they are gluten-free friendly.

If you can’t find this information online, call the restaurant during non-peak hours (or walk in if you are passing by) and ask them if they can accommodate your dietary needs and what type of dishes they can offer you.

It will definitely be easier to avoid gluten in restaurants that have a gluten-free menu or mention gluten-free items on their menu, as the staff should be accustomed to preparing gluten-free food and have experience in preventing cross contamination. These types of restaurants are always a solid option.

Sometimes you can receive excellent (gluten-free) service even in a regular restaurant. Just talk to them before to see if they sound knowledgeable. If for whatever reason you don’t feel confident, thank them and choose another place. It isn’t worth the risk to your digestive system.

3. Always be the last to order

You know it: gluten free orders are just a tiny bit more complicated than those of your fellow diners. It’s never fun to be that customer who needs to ask for a million changes.

Always let the other people order and be the last one to speak to the waitperson. This will allow you to have the extra time to discuss the menu and avoid that awkward moment when everybody looks at you weird as you rattle off the ingredients you need to stay away from.

In fact, when people are done with their order, they move on to new conversation. This will allow you to be as inconspicuous as possible and make sure your waitperson has a clean grasp of your dietary needs.

If the server does not seem to be too knowledgeable, nicely ask him if you can speak to a manager. Do not be embarrassed about requesting better assistance or asking multiple questions. It is your right to know how a dish is prepared and if it’s safe for you to eat. 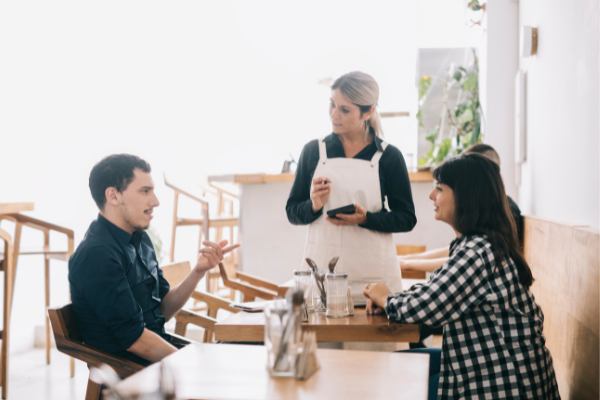 For people who don’t deal with food restrictions themselves it’s sometimes hard to understand all the various permutations of health issues gluten can cause.

Most likely, they are not informed about the differences between celiac disease, wheat allergy, gluten intolerance, and autoimmune disease exacerbated by gluten. If you don’t sound convincing when explaining your needs, they’ll assume you’re just trying to be trendy and not treat your order as seriously as they should.

The most effective way to communicate your needs and avoid gluten in restaurants is to use the words “gluten allergy” and describe it as “severe.” Even if that’s not specifically your case and it’s not technically correct, phrasing your words like this will instantly make your server be more careful when dealing with your order and will most likely get you a safe, gluten-free meal.

In order to better communicate your needs to a kitchen staff member, you need to educate yourself and be aware of not-so-obvious sources of gluten and sneaky contamination issues so that you can ask the right questions.

Of course we all know bread, pasta, and baked goods aren’t allowed on a gluten-free diet (unless they are a gluten-free version) but you need to be informed about all other potential gluten carriers commonly used in a restaurant kitchen, like imitation crab, seitan, soy sauce, flavorings, thickeners, and other condiments.

Instead of asking YES or NO questions, invite the staff to elaborate on the preparation of the dish you are interested in and how they handle hidden sources of gluten or contamination.

Here are a few questions to ask in order to avoid gluten in restaurants:

6. Do NOT assume gluten-free dishes are actually free from gluten

Oftentimes, we assume a dish is gluten-free just because there is nothing in the description that mentions gluten containing items.

And so we figure a rice dish is gluten free, when oftentimes it is not. Sometimes Cuban rice, saffron rice, and paella are cooked in a stock that has wheat in it. Or we wrongly assume that buckwheat noodles are gluten-free because we ignore that buckwheat only comprises a very small percentage of the noodles and that the rest is made with wheat.

Even at the cost of sounding redundant, always ask how each item is prepared. Gluten hides in marinades, dressings, gravies, stocks, and thickeners that are added to foods that would normally be gluten-free. 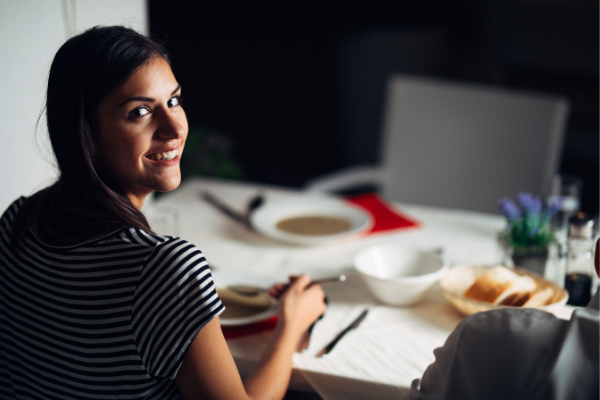 When you can’t find anything that fits your needs on the menu, ask the kitchen to create a custom meal for you by preparing a rice salad or by grilling or steaming fish and/or vegetables.

Keeping your custom order simple will improve your chances to avoid gluten in restaurants. Avoid all items that involve sauces or marinades and choose dishes made with the fewest ingredients. As per the dressing, ask for olive oil, lemon juice, salt and pepper on the side so you can be extra sure of what goes into the seasoning.

If you keep it simple, almost every kitchen will be able to accomodate a safe gluten-free meal for you.

Lastly, remember to arm yourself with patience. Altering the preparation of certain dishes will slow down the source a bit. Be aware of that and allow the kitchen some extra time to provide you with a gluten-free meal.

Just because the ordering process went smooth, do not think that when the food arrives you are ready to eat. There can be instances that you will not be served gluten-free even after having conversations with more than one server about your order.

The best thing you can do is train your eye to distinguish gluten-containing items from their gluten-free equivalents, and to investigate your dish closely to inspect the possible presence of gluten.

Here are some examples:

In short, when the food arrives, before you start eating, examine it and when in doubt, ask the server to confirm it’s free from gluten. 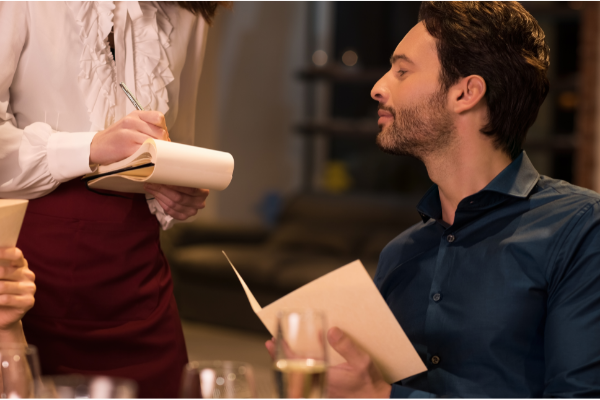 9. Stick to your plate

People love to split food and have a little taste of everything. But when the group you are dining with orders appetizers for the table, 90% of the time it’s something you can’t eat.

In order to avoid gluten in restaurants, instead of asking for modification on a dish the group wants to split, simply let them order what they want, relax, sip your wine, and wait for your meal.

Lastly, stay away from shared desserts. If you can’t find anything that suits your food intolerances opt for a bowl of fresh berries. And if you can’t conceive of ending a meal without a proper treat, pack a gluten-free snack or couple homemade cookies to enjoy when it’s most appropriate.

Remember to sit back and enjoy your gluten-free meal!

Following these nine tips will make it easier to sit back and enjoy your meal.

After your meal, thank the staff and tip well to show your appreciation. Think of a good tip as an investment in your future dining experience at the same restaurant. Be sure to return to restaurants that work out for you to save the hassle of reinventing the wheel every time.