Posted at 18:02h in Food + Drink by Blair Witkowski

There are plenty of famous food cities in the U.S. – New Orleans, New York, Austin, Nashville, and San Francisco to name a few – while other cities struggle to secure a toehold among the culinary elites. Through my travels I have found that many cities actually do offer a comparable level of quality and originality in their cookery. There are many under-the-radar food destinations in the U.S. and many of the lesser-known food cities offer superior quality meals at a lower cost with restaurants that will absolutely amaze you.

Greenville’s food scene isn’t just for local residents and the casual visitor anymore. This amazing South Carolina city, with its Southern charm and cornucopia of culinary contributions, is making a name for itself as one of the up-and-coming food destinations in the U.S.

What makes a city a great food destination?

In rare cases, it can be a chef who is so transcendent that a restaurant itself becomes a destination – like when Ferran Adria was cooking at El Bulli in Spain. More likely, though, it’s a wide range of experiences and flavors: a place where one night you can eat a classic representation of the food of the locale, and the next night you can dine at a place where the chef is bringing his or her own influences to create dishes of a singular nature to the table. Add some decent wine, or a local bar scene, and I’m ready to get on a plane or take a road trip.

The approximate half-way point between Atlanta, GA, and Charlotte, NC, Greenville is a delightful Southern city that’s seen substantial refurbishment and growth in recent years and continues to thrive. It’s home to the resplendent Falls Park on the Reedy River (located just steps away from a rejuvenated Main Street) and notable festivals like Artisphere (an annual three-day festival highlighting more than 250 artists from around the world representing 17 different mediums). 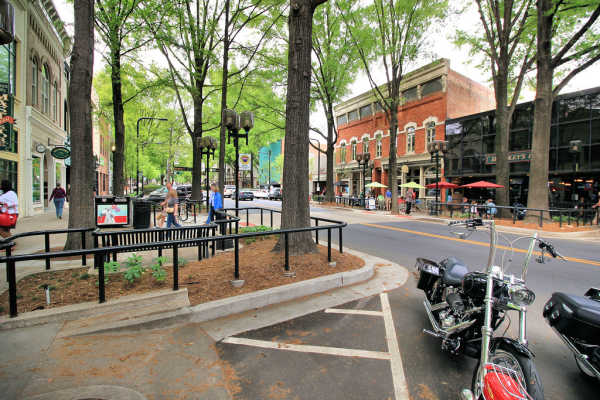 Restaurants in Greenville and the surrounding area are offering food from around the globe: from classic barbecue, Southern comfort fare, and farm-to-table selections, to Peruvian rotisserie and authentic Afghan dishes. If that’s not enough, Seedlings is the first farm-to-table restaurant geared toward kids. And two major food festivals, Euphoria and Fall for Greenville, further enhance the city’s culinary chops.

Given that Greenville has no dearth of recommendation-worthy restaurants (120 restaurants, many lining the nearly 2 mile long Main Street) it’s no surprise that an online search turns up many “best of” lists, each claiming to be the definitive guide on where to eat.

Our idea was to find the best restaurants which support (or dismiss) the concept that Greenville is a food destination city. Happily, after many visits, we can definitely attest that Greenville is a worthy food destination city. We arrived at this conclusion after sampling a multitude of dishes at many, many places. We were not guided by other lists and some of our recommendations are not found on other lists though, of course, many are. We also shunned most online reviews like Yelp and Trip Adviser so as not to be unduly influenced. This was a hands-on search.

Everyone says you should follow the lead of locals when eating in a new city, but actual suggestions on how to do that are vague.

When looking for restaurant recommendations in our hometown and the surrounding area, we rely on friends and possibly review sites. Yet, when we are in a new city, we dream about an enigmatic “local,” someone who will guide us into the best meal of our lives, preferably somewhere “authentic” and off the beaten path. Though we would never expect this of a stranger on the street at home, we expect it in other cities from people like us.

New York City, where I lived for a while, has a fantastic food scene. That doesn’t make every New Yorker an expert. If you asked 100 random people where to eat you would receive dozens of different answers.

So what do you do when looking for the right recommendation in a new city? Your best bet is simply to know who to ask. Let me explain. 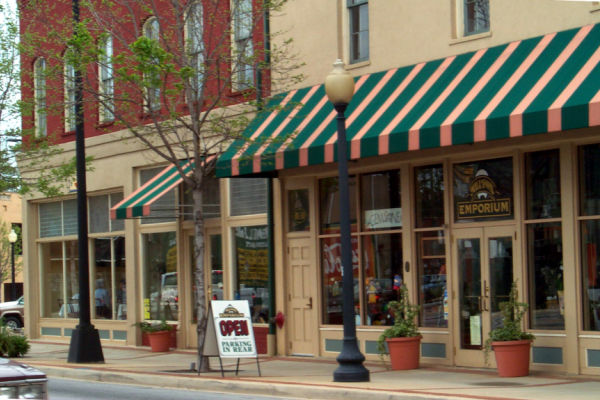 Few people are better informed of the ins and outs of a city’s food scene than the very people who work in it. I have always put trust in bartenders and waitstaff. “Bartenders know best,” is my motto for drinking and eating. Bartenders work with and drink with other bartenders who work and drink in other bars and restaurants. Whether looking for a dive bar, a fancy cocktail place, or a delicious meal, I have found that most bartenders will point you in the right direction. The same goes for your restaurant server, who works long hours with people in the food world. The advice from your bartender and waitstaff is some of the best you will get. In some cases, a nice tip to a nice staff member will help you discover where the chefs and cooks eat. You will then have guaranteed destination-worthy eateries.

Now it’s time to channel our inner Anthony Bourdain. We are going to eat around the world without leaving Greenville. If you want to savor all that Greenville has to offer, then this list is for you. Restaurants listed are in no particular order but represent the diversity in food that makes Greenville a culinary destination. 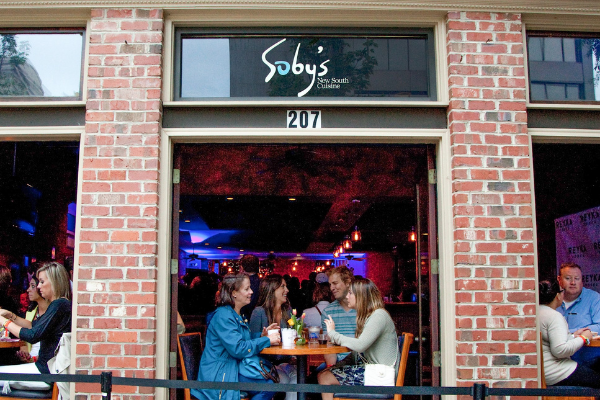 Owner Carl Sobocinski is arguably the godfather of the revitalized Greenville dining scene. Soby’s is located in what was a shoe mart. Renovated, it has beautiful brick walls and a skylight, with inventive food, a well-trained staff, and a lively bar (huge wine cellar) which make this a must stop. 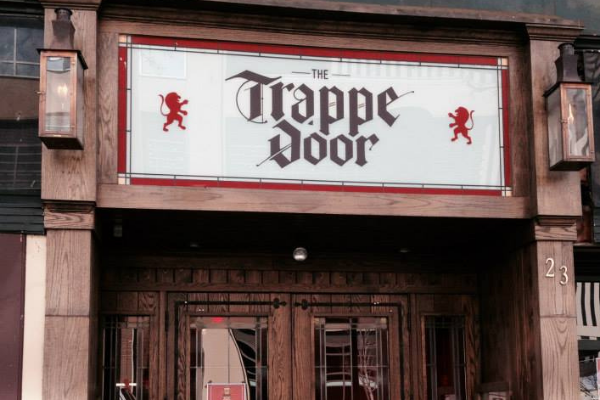 Underground spot with a speakeasy feel. Atmospheric setting. Large selection of moules (mussels). Huge beer selection. Open 7 days a week, which is a plus as many Greenville restaurants are closed on Monday. 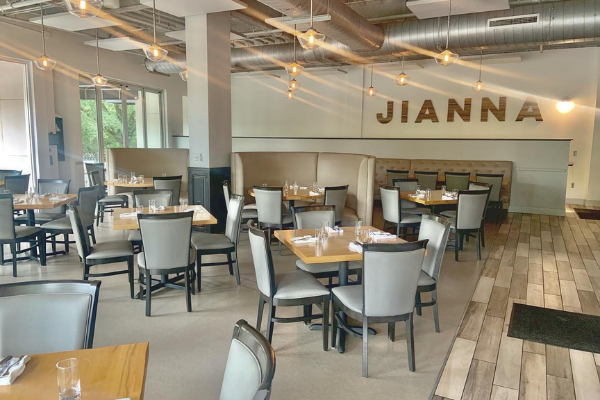 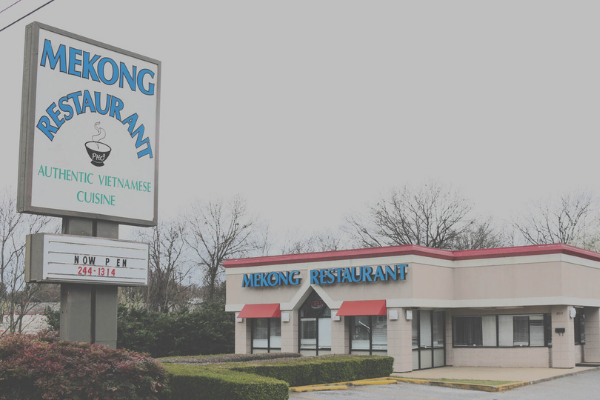 Don’t be fooled by the nondescript building, Mekong is the real deal. We sampled many Asian restaurants and none came within a shouting distance. A singular dining experience. Check out the garden in back of the restaurant which supplies most of the restaurant’s produce during the growing season. 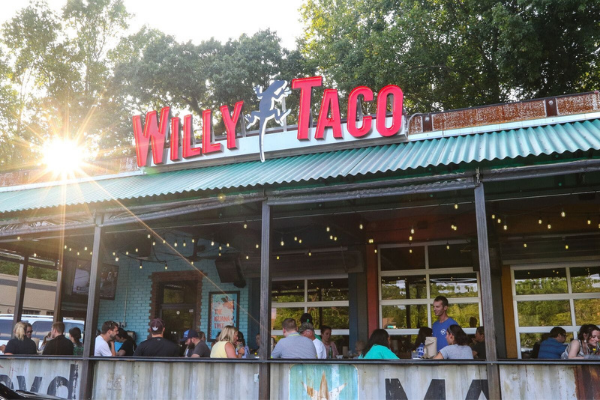 Housed in a 1930s Feed and Seed store that underwent a multi-million dollar renovation, it’s now a 200-seat restaurant with both indoor and outdoor seating. Friendly, lively spot that might be the most eco-friendly restaurant in Greenville. Behind all the flash is a serious restaurant serving made from scratch food. Also a location in Spartanburg. 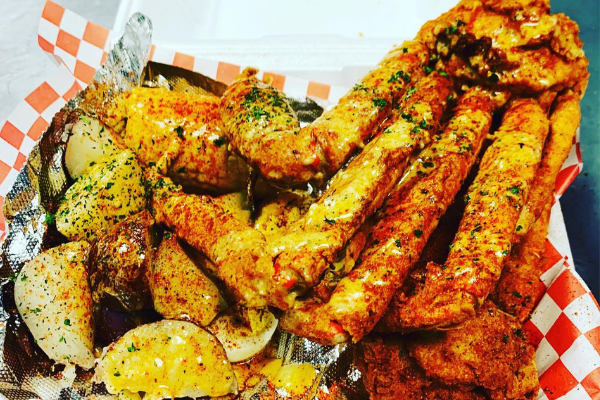 Style: Seafood centric spot with a laid back atmosphere in clean spacious quarters.

Bringing the Lowcountry to the Upstate. Family owned. Also a Spartanburg location. This is glorious messy food, but that’s part of the fun. Owner Greg Brantley grew up in Beaufort and knows all the coastal staples. 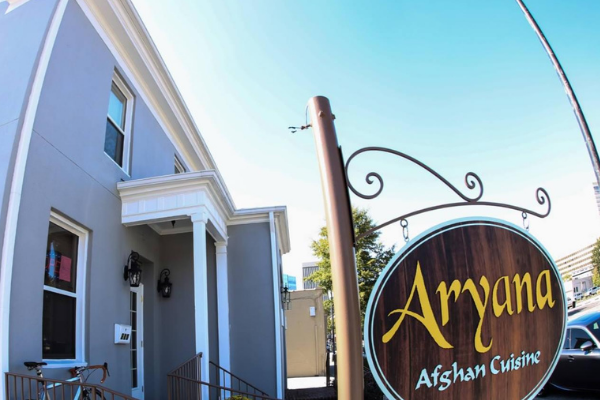 Tuesday through Friday (11:30am to 3pm) the restaurant offers a large plate with two proteins, two starches, and two vegetables. Weekly menus posted on Facebook. Dinner is served on Saturday evening but, to our taste, lacks the variety of the ever-changing lunch menu. If you never considered Afghan food we think you will be surprised as to the variety and depth of flavor. 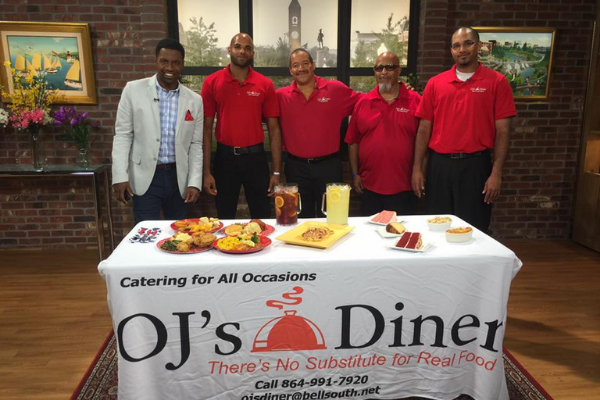 This is your quintessential meat and three restaurant. You either love OJ’s, or you hate OJ’s, there is no in between. We love OJ’s.

Tip: Daily specials usually sell out and  if you want fried chicken try to get there before noon. 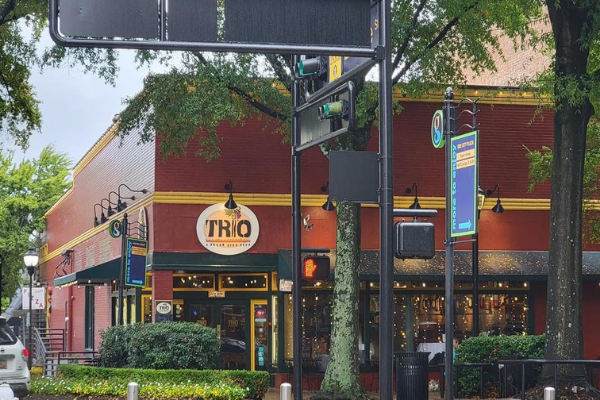 If you want local, this is local. Trio was the most recommended spot by bartenders, waitstaff, and chefs. Owner Steve Boone has created a spotless home away from home. 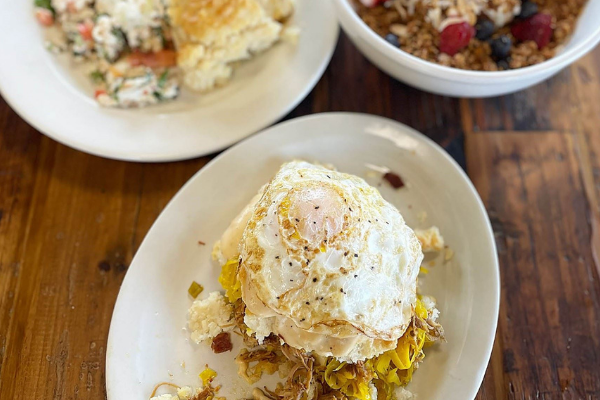 Style: A fresh from scratch restaurant featuring an incredible array of flaky tasty biscuits in a spacious setting that includes patio and drive through

Everything fresh, everything sourced locally. These are huge biscuits. Taylors, SC, is a short 20 minute drive. Friendly, attentive service. 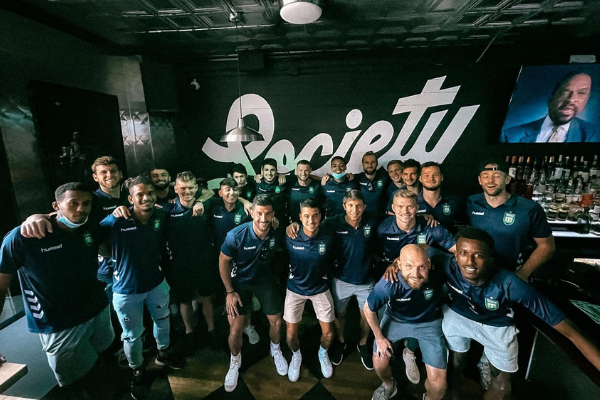 Style: Industrial, art deco digs with an emphasis on fun

Gourmet pressed sandwiches, super fresh salads, ramen, and booze. Two floors, two bars. Amazing chef Chris Rosensteel is a veteran of Iron Chef competitions. Owner Jeremy Kreuzer is all about atmosphere, food and fun. Located in the spot vacated by the iconic Charles Steakhouse which opened in 1921 and was at this location 1933-2014. 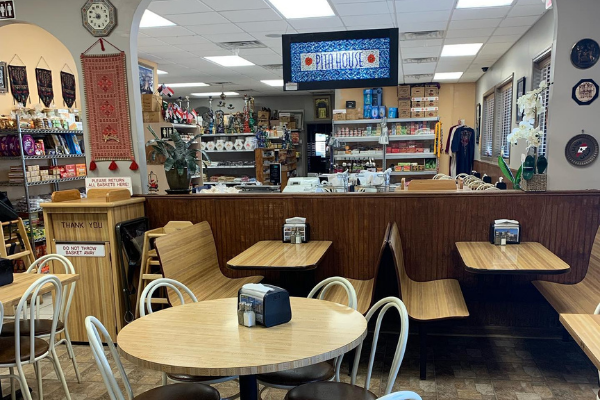 Comfortable friendly place serving top notch Middle Eastern food. Bountiful market, and if olives are your thing, you will be very happy. Mobbed at lunch. Pita bread is made fresh everyday.

Tip: Cash or check only 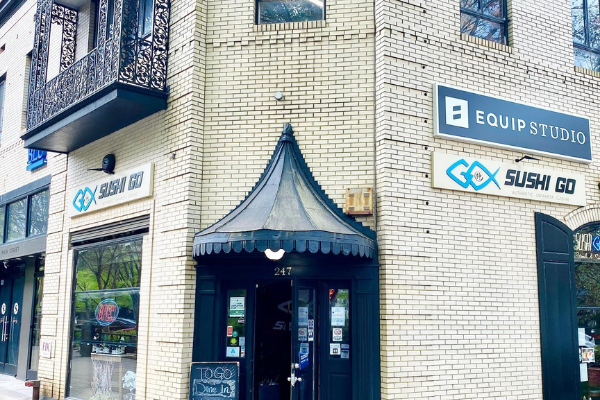 Chef Max Goddo is a classically trained sushi chef turning out the freshest and most innovative bites of sushi in Greenville. From traditional rolls to Nigiri to more elaborative creations like Godzilla and Volcano rolls, creative specials, sake, and more. The only sushi spot in Greenville that you need to know. 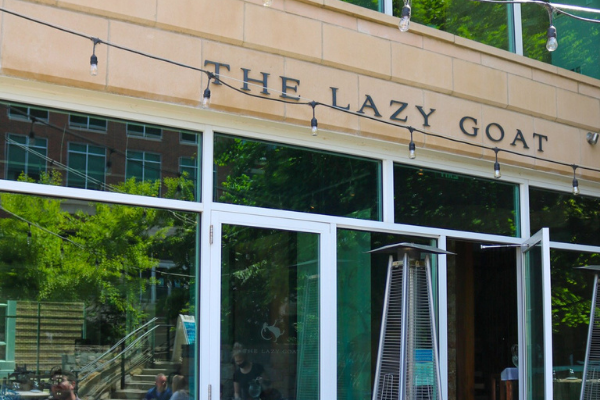 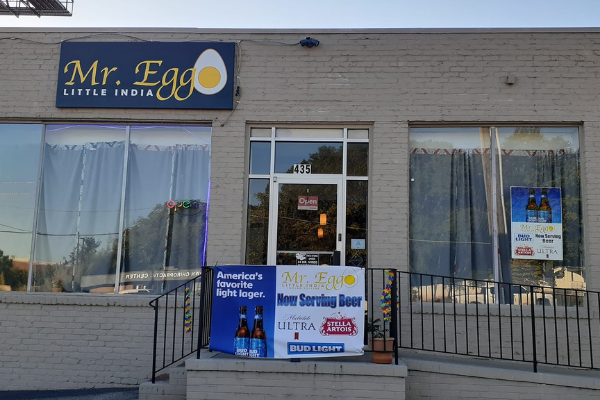 Great value. Incredibly friendly service. Fifteen Indian egg dishes. We received 5 recommendations for Indian fare. We tried them all and it was no contest; Mr. Egg was the winner by a knockout! 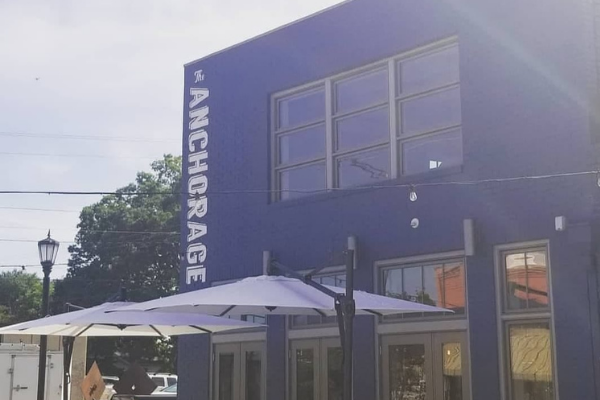 Note: Menu is ever changing and these dishes might not be available

Located in the Village of West Greenville with a colorful mural adorning the front and patio seating. Chef Greg McPhee was a James Beard semi-finalist in 2018 for Best New Restaurant. A major accomplishment considering it was his first year in business. Locally-sourced ingredients and innovative menu in understated surroundings. Food, drink, and service adds up to a stellar evening and, for our money, the best all-round dining experience in Greenville.

Tip: Make sure to make a reservation before you go 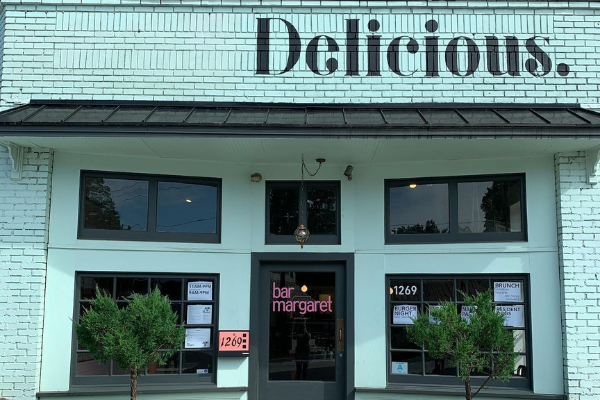 As we said, bartenders know best and it was no different with Bar Margaret. We received at least a half dozen recommendations and we’re glad that we listened. All in all a hip, welcoming place with a cocktail menu that changes almost daily. The hamburger was the best we had in Greenville. Check out the funky artwork. Knowledgeable bar staff. 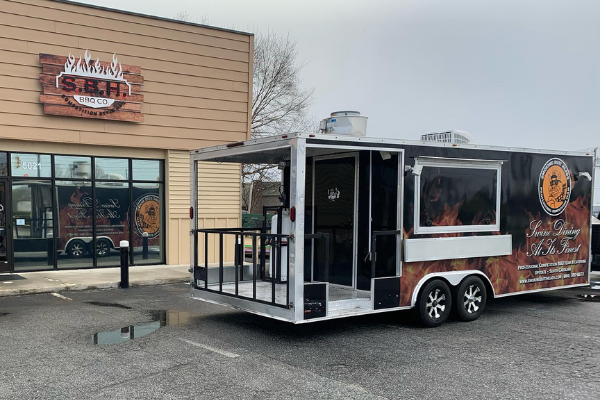 Some of the best barbecue we ever tasted. This is competition worthy BBQ and, in fact, the people behind the brick and mortar operation have competed on the KCBS BBQ circuit with great success including a World Championship. For our money, everything on the menu is a must try. Don’t sit on the burnt ends when they’re available.

Tip: Everything is made fresh daily and sells out quickly. Remember, the early bird catches the worm. If you are ordering more than 3 lbs you can call their hotline 24 hours and order in advance.

With props to Frank, we are going to take some poetic liberty and sing, “Greenville is our kind of town.” After eating our way through the city we are absolutely sure that it is indeed a food destination. And we have a feeling that we just touched the surface. 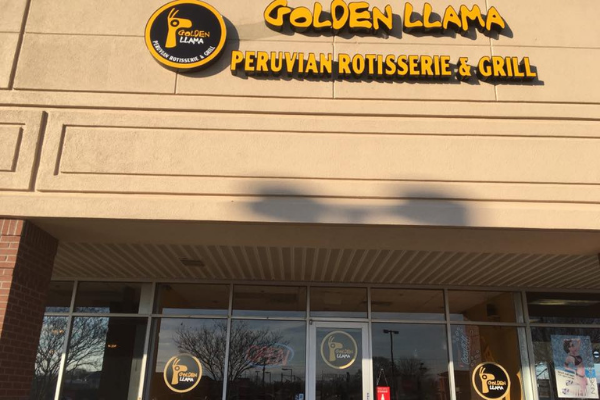 Style: No frills restaurant tucked away in a corner of a strip mall serving homemade Peruvian meals

A Peruvian restaurant in Greenville is further proof that this is a food destination city. Spare, yet comfortable seating with a large back room. Order first, pay, pick up food (table service sometimes available). All menu items are made fresh daily. Anthony Bourdain would have been at home.

Where To Eat In Greenville